Where is Dylan Ratigan from MSNBC? 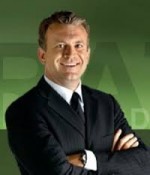 I was an occasional viewer and my husband was a big fan, but after he threw in the towel, anchoring his own show last June, Dylan Ratigan was nowhere to be found.  Recently, he reappeared on a hydroponic farm in southern California.  He has joined forces with a former Marine to build a hydroponic network and employ veterans.

I’m impressed!  In today’s media we have a 24 hour resource of ‘talk the talk” personalities who do nothing else.  This man left it all, and is putting his boots in the soil.  Talk alone cannot change this world.  Exchange of ideas is important, but we need leadership, those who can “walk the walk,” and Dylan Ratigan is leading by example.  More power to him!  Thanks Mr. Ratigan.